The Charge Blade (CB) features 2 modes. Effective CB usage requires balancing between Sword mode, with its high mobility and ability to guard against incoming attacks, and Axe mode, with its longer reach and more powerful attacks. Energy gained from Sword mode can be stored in Phials, which can then be used to boost guarding abilities and damage output in Axe mode. 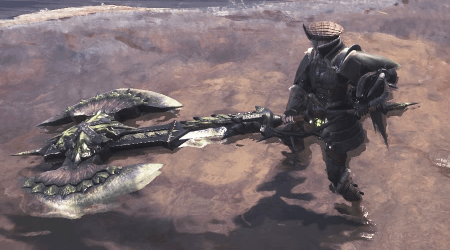 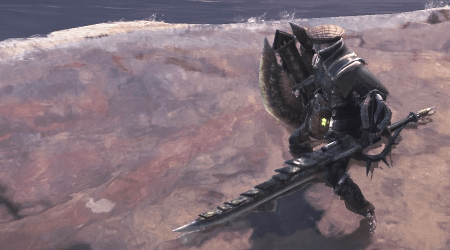 Attacks in Sword mode causes the sword to gather energy. When sufficient energy is gathered, the Charge Gauge will be tinted yellow/red. Performing a Charged Phial move will store this energy into Phials. If too much energy is stored in the sword, it will cause the sword to be overcharged, and any attack in Sword mode will be deflected.

Stored Phials can be used to unleash various Elemental Discharges (EDs) in Axe mode. The Phials can also used to grant the Chage Blade an Element Boost (more information below). While in Element Boost, the Guarding capability in Sword mode is greatly enhanced and the Amped Element Discharge attack in Axe Mode is strengthend.

While in Element Boost, the Charge Blade gains stronger guarding capability. Furthermore, any attacks blocked by the shield will trigger a phial burst that harms the attacking monster.

Performing an Elemental Roundslash during an AED or SAED

When blocking an attack, the Charge Blade can be chained into various attacks during a Guard Reaction.

In Sword mode, certain attacks place the shield in front of the player during its attack animation. In this short window, the attack has guarding capability. This guard window and the act of guarding with this guard window are collectively known as a Guard Point (GP).

A successful GP block can be chained into various attacks. Combined with Element Boost, Guard Points allows the player to block attacks during their attack animations and then perform an immediate counter attack.

When performing a Charge Phial move while Element Boost is active, the player can chain into Sword: Condensed Elemental Slash by holding

and releasing it at the right timing. When timed correctly, the sword will be imbued with the Phial effect temporarily.

during a Charge Phial move. 2. Release